Voilà! 🤖 ChatGPT has entered the stage. It can write an interpreter for your language, be your co-founder and break and fix a blockchain contract for you. It can solve all the problems of Advent of Code.

I have been coding for 40+ years now and I’m feeling it gets to an end. Like ancient occupations, we wonder how that could be ever a thing.

And it does pretty well on other coding tasks. From my playing around with it, it should be able to replace StackOverflow in a short amount of time (unclear then how it learns new things without Stackoverflow though, but Github). I asked ChatGPT my 15 minutes interview question to determine if someone can code. Which is: “Write a string reverse function” (You can learn a lot here). ChatGPT aced it. It could do the more difficult “Write a string reverse function without builtins in a tail recursive way”

And it solved all the follow-up questions, like “How would you test that function” (find the one strange test :-)

It also answered the emoji question. 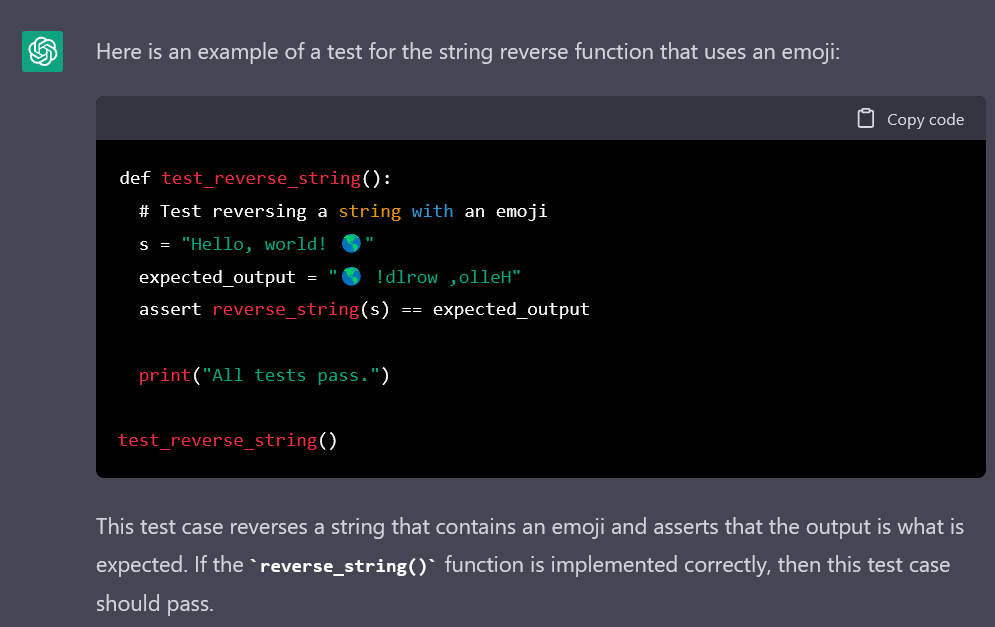 From my interactions, I would go to the next interview round with the AI.

With AI progressing fast, from image generation to now ChatGPT, what is the endgame for software engineering? Are we seeing the last days?

The endgame is a general AI that just does things. We will get there in three steps.

We have reached the first step with ChatGPT. As shown it does generate the code you ask it for. And it does pretty well (currently with some bugs sometimes, but hey, who is perfect? - another ChatGPT can debug the first).

So we’re up to the next step, an AI that can do things you tell it to do. Today you have a SaaS CRM company with a tool you use. With an AI it’s “Send a reactivation email to customers every month” based on your customer data. Today I have a tool to generate and manage Google Ads. There are many SaaS companies around managing Google Ads. Step two is telling the AI “Create Google Ads to sell more X with a monthly budget of $1000”.

“Write an article about the endgame of software engineering”. I don’t need someone to write a word processor and a grammar checker for an AI to write that article. And publish it. And spread it. Probably for other AIs to read.

Then we don’t have software engineering anymore. No need for developers. When I openly said “Software Engineering is dead in 10 years” because of AI, someone replied, “It’s still programming”.

If it is, then telling a marketing manager to create some ads is programming too. And no it isn’t.

The third and the endgame is an AI that does things on its own. Create a website to sell things. Create ads to drive traffic. Do accounting and massage taxes to pay. Create the landing pages and the marketing material. Send reactivation emails if it thinks there is potential and need for it. To get money it writes pitch decks to talk to other AIs to get investment money. I thought this future was far away, but with ChatGPT it looks just around the corner.

The endgame is near and it’s the end of software engineering. ChatGPT is one of the riders of the apocalypse and the bells are ringing. And they are not Christmas bells.

As a CTO, Interim CTO, CTO Coach - and developer - Stephan has seen many technology departments in fast-growing startups. As a kid he taught himself coding in a department store around 1981 because he wanted to write video games. Stephan studied computer science with distributed systems and artificial intelligence at the University of Ulm. He also studied Philosophy. When the internet came to Germany in the 90 he worked as the first coder in several startups. He has founded a VC funded startup, worked in VC funded, fast growing startups with architecture, processes and growth challenges, worked as a manager for ImmoScout and as a CTO of an eBay Inc. company. After his wife successfully sold her startup they moved to the sea and Stephan took up CTO coaching. You can find him on LinkedIn, on Mastodon or on Twitter @KingOfCoders

Thanks for signing up.

I've sent you an email confirmation.

• Best books for CTO • CTO versus CTO • Experienced CTO Coach • Engineering Coaching • CTO Jobs • CTO Mentor • CTO Mentoring • CTO Newsletter • CTO Role • How many developers do you need? • Outsourcing Guide Technology and Roadmaps • How to become a CTO in a company - a career path • Work from home and remote with Scrum • Waterfall and Scrum